Awarua Synergy had the privilege of hosting Matt and Sarah Brown who together, co-founded the movement ‘She Is Not Your Rehab’ this week.  Monday they held talk at Te Rau Aroha Marae in Bluff with many from our Maori Social & Health Services attending, and then Tuesday morning with Awarua Synergy at their team meeting.

Awarua Synergy have a largely male workforce, working in a highly stressful industry, and we are delighted to bring Matt and Sarah south to tell their stories and korero this week.

Awarua Synergy are proud to support the ‘It’s Not Ok’ and ‘She Is Not Your Rehab’ messages addressing domestic violence and abuse within our communities – as they recently did the ‘Mates In Construction’ programme, that builds and strengthens communities in the workplace and across the construction industry. 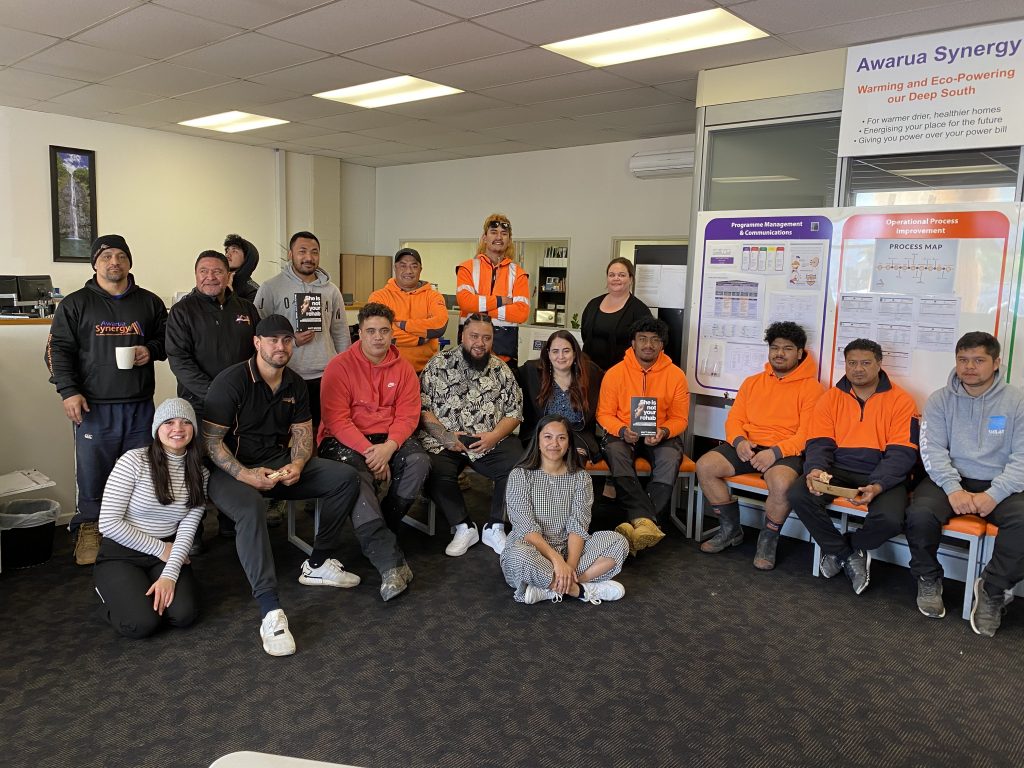 Awarua Synergy team (only some of them!) 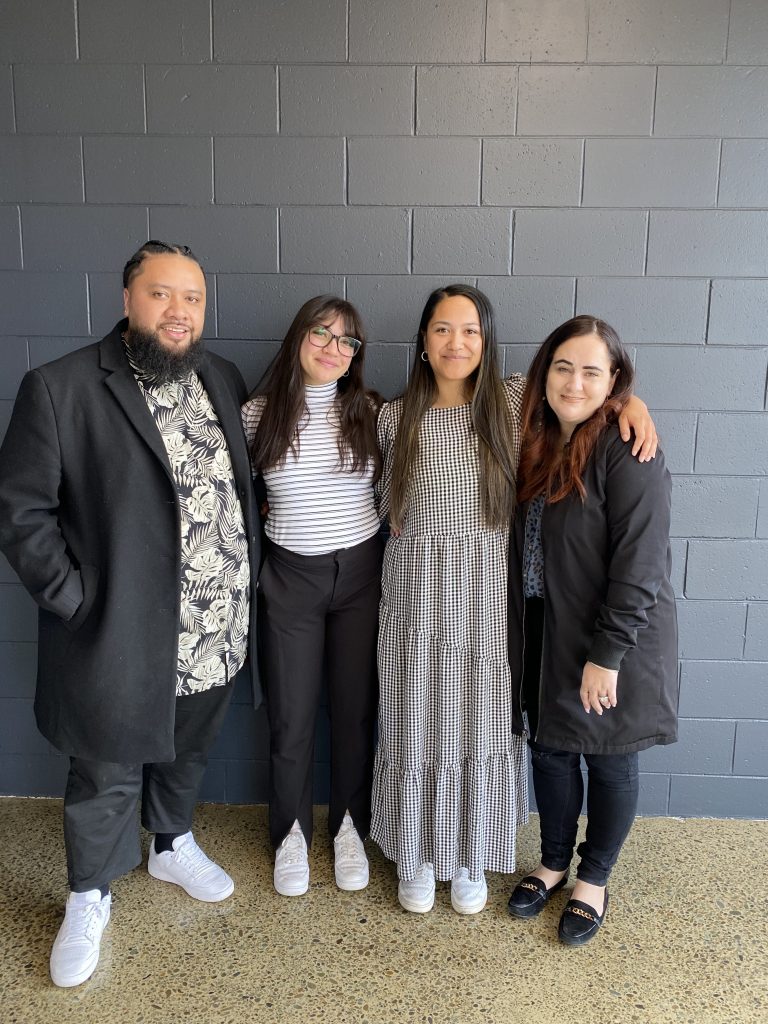 He is a survivor of family violence and childhood sexual abuse and shares his story with the men who frequent his busy Christchurch and Palmerston North barbershops, My Fathers Barbers, as a way to foster vulnerability, healing, and connection. He has facilitated multiple barbering programs inside Christchurch Men’s Prison, Te Puna Wai O Tuhinapo, a Christchurch youth justice facility and was named a Corrections NZ patron in 2020.

Matt has cut everyone from All Blacks to the Wu Tang Clan but his true calling; he believes lies in his work to redefine societies view of masculinity and to help end the cycle of domestic violence affecting whānau all over New Zealand.

In 2018, Matt and Sarah partnered with the Ministry of Social Development as ambassadors for their ‘It’s not OK Campaign’ and are proud ambassadors for the work of Aviva Families, a family violence service centre in Christchurch. In collaboration with them, Matt hosts a men’s anti-violence support group from his barbershop.

Together they co-founded She Is Not Your Rehab and launched the concept in Matt’s 2019 TEDx talk. He says the movement is an invitation for men to acknowledge their own childhood trauma and to take responsibility for their healing so that they can transform their pain instead of transmitting it on to those around them.

A New Zealand Māori (Ngāpuhi/Te Rarawa) wāhine, his wife Sarah is a celebrant, writer, and producer who is passionate about their mandate of ‘creating violence free communities’ and has worked alongside Matt since his brands began. She co-founded Sister Sister, a digital marketing agency with her sister Ngaroma and works with clients across Aotearoa to tell stories with creativity and conviction.

The couple are happiest together when with their three children and whānau, and when being creatively inspired and travelling. They have just launched their first book – an NZ Bestseller She Is Not Your Rehab with the goal to encourage intergenerational healing.

We are very thankful for the support provided by the Southern DHB, Well South and Te Runaka o Awarua. 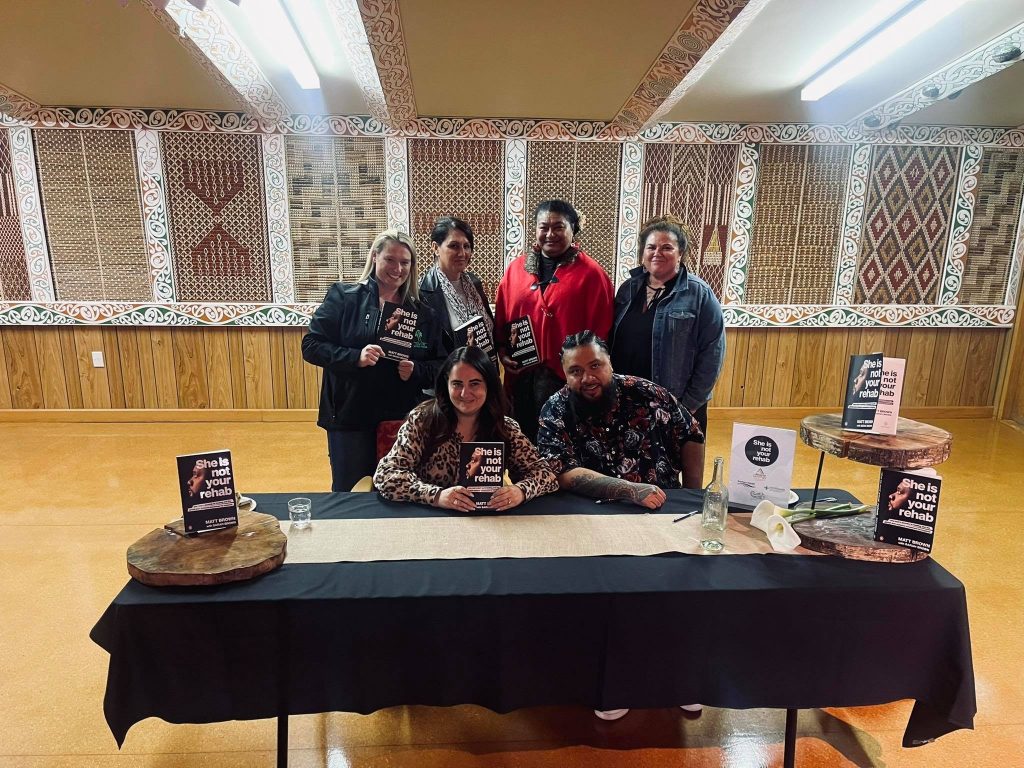 Whether it’s your farm building, home or business, condensation can… continue reading

You guessed it. It’s that time of year again and we’re chipping in… continue reading

We know, it’s a hard one to accept. But inevitably, Winter is here. … continue reading

View all
Book a visit